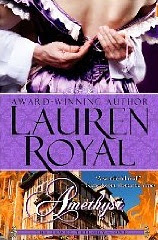 Her hand was pledged to one man...
Her heart belonged to another...

Amethyst Goldsmith makes dazzling jewelry, but her future isn't nearly as bright as the pieces she creates. Though custom dictates she wed her father's apprentice, her heart rebels against the match. In mere days Amy will be condemned to a stifling, loveless marriage, and she sees no way out--until the devastating fire of 1666 sweeps through London, and tragedy lands her in the arms of a dashing nobleman who knows a diamond in the rough when he sees it...

Colin Chase, the Earl of Greystone, has his future all figured out. He's restoring his crumbling castle and estate to its former glory, and the key to its completion is his rich bride-to-be. But the Great Fire lays waste to his plans, saddling him with trouble--in the form of a lowly shopkeeper's daughter with whom he's most inconveniently falling in love...
~~~~~
Book One of Lauren Royal's Jewel Trilogy
Special Author's Cut Edition (revised in 2011)
A full-length novel of 120,000 words (about 480 book pages)
Rated R: explicit love scenes
Originally published by Penguin Putnam (Signet)

This Author's Cut Edition e-book has been completely revised from the original and includes bonus content: a sneak preview of Lauren's next book, plus a link to an online contest where you can enter to win a piece of jewelry featured in the book.

Nominated by Romantic Times for Best First Historical Romance!
Posted by Donna Fasano at 7:00 AM