Confessions of a Courtesan by Deborah Hale 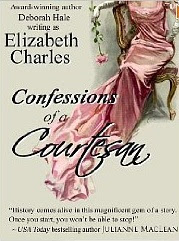 Scandalous but True! From the harsh streets of 18th century London, Lizzie Cane rose to become the most successful and sought-after courtesan in England! Mistress of earls, dukes and even the young Prince of Wales, she lived an exciting luxurious life that was not without its perils. A single misstep could spell disaster!

Then, at the height of her career, she risked everything she had struggled to gain by breaking the courtesan's cardinal rule...Never fall in love!

Elizabeth Charles is a pseudonym for Canadian author Deborah Hale. Deborah's first novel, the Georgian-era romance My Lord Protector won RWA's Golden Heart award and was nominated for the RITA for Best First Book. Since then she has written more than twenty more novels in the genres of historical romance, inspirational romance and otherworld fantasy. Her books have been translated into more than a dozen languages and sold millions of copies worldwide.

"Hale's characters are so finely created they become real in her readers' minds and hearts." - Sheryl Horst, syndicated romance reviewer

"Yet another masterpiece penned by the historical mistress of romance. Don't miss this truly touching and tender story." - The Old Book Barn Gazette

This edition contains additional bonus content:
Separating Fact from Fiction
What Happened to...?
Verses on the Temple to Friendship
Funeral of the late Honourable Mrs. Fox
Selected Research Sources
Posted by Donna Fasano at 5:00 PM