Sojourn With a Stranger by Keta Diablo 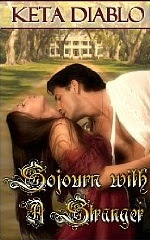 Penniless when she arrives in Norfolk, her mother and father drowned at sea, Raine Brinsley longs to return home to her grandfather in Maine. When Derek Stafford, owner of an affluent manor, offers a solution to her dilemma, Raine is stunned. And outraged. She agrees to fulfill the contract to bear his child, and vows to dispel every memory of the cad from her mind. Will her traitorous heart listen?

Derek’s only goal in life is to father an heir for Stafford House to secure his future. But the exquisite Scottish lass arrives at the manor and interferes with his best-laid plans, and his heart. After one night in her arms, guilt, and the loss of his soul become his penance. He’ll do anything to win her love, anything to quench his tormenting hunger.

“I applauded Raine for her strength in the face of her parents’ deaths, especially during a time where women were seen as needing constant protection. Her determination not to accept Derek’s charity was admirable, as was her willingness to tackle any job assigned. Although a strong woman, her gentleness is demonstrated in her concern for the spirit and her attempts to understand its message. This story has everything and then some – romance, birth, death, voodoo, adventure, psychic ability, and a touch of Civil War – and I could not put it down. Keta Diablo has once again done a wonderful job of involving the reader in the lives of her characters, and I highly recommend this book.” Five Stars, Goodreads Reader

“This is a wonderful paranormal romance, which quickly picked up speed as the story progressed. The spiritual undercurrents in the novel are interwoven into the plot with the skill of a great author. Will Lucinda find her revenge? Will the young lovers be reunited in triumph and love? Ah, but what kind of Scot would I be if I told ye the end afore ye gazed upon the first page? We Scots are rather in tune with the paranormal anyway. I enjoyed reading Sojourn by Ms. Diablo. I was hooked the moment I saw the cover, but you got me by the second page. Well done!” Book Marketing Network, Five Stars

“Both hero and heroine had some issues they had to overcome, but I felt more for Derek. He was the one who truly overcame his personal challenges to become a better person. As a groveler, he gets an above average mark. His angst made my day. That added to the intricate plot the author designed and the crooked path to happiness Raine and Derek must travel made this a much enjoyed read.” Night Owl Reviews. Four Stars
Posted by Donna Fasano at 7:00 AM