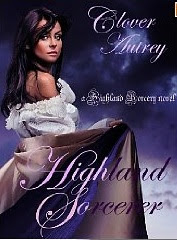 Charity Greves has the gift of healing. So when a naked bleeding Highlander materializes out of the air into her kitchen, she does what any rational free-thinking herbalist under the same circumstances would do--she heals him. She didn’t expect to be drawn back to the 13th Century where a dangerous whacked-out witch holds the handsome Highlander captive.

Nor is she prepared to be drawn so strongly to him that she’ll do whatever it takes to save him.

Imprisoned by the witch, Toren Limont the High Sorcerer and Protector of the Fae’s magic, uses the last of his magical reserves to go forward in time and find a healer the witch doesn’t have any influence over. He merely seeks the small respite a healing can give him in order to continue to withstand the witch’s tortures long enough for his clan and siblings to flee.

Until Charity falls with him through time as either his salvation or his entire clan’s downfall.
Posted by Donna Fasano at 5:00 PM