You Had Me At Hello by Amanda Ashby 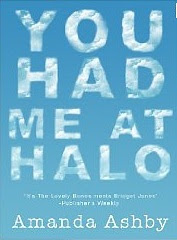 When Holly Evans wakes up dead at the tender age of twenty-two, she’s pretty sure things can’t get any worse (especially since her boyfriend was about to propose to her with a diamond ring the size of her knuckle). But Holly’s wrong and it turns out that she’s still got some mortal baggage to unload before she can walk through the pearly gates, which is why she’s being sent back to earth to get things sorted out.

Problem is that when she lands in the body of computer geek, Vince Murphy, she discovers that instead of having left the building, Vince is still very much alive (and remarkably unimpressed at the idea of sharing with a dead girl). So now Holly has to sort out her unresolved baggage in the next forty-eight hours while stuck in the body of a guy she barely noticed while she was alive. And if she doesn’t? Well, let’s just say that she’s probably not going to like the alternative.

"It's The Lovely Bones meets Bridget Jones in this fluffy take on what happens after death...it's a fun, witty traipse through the afterlife." Publisher's Weekly

"This book has a delightfully quirky concept that develops into a fun and interesting story. Peopled with a fascinating variety of characters, it also has an intriguing mystery and a charmingly different type of interaction between the hero and heroine. Expect a delightful tale with a wonderfully distinctive ending." 4 1/2 stars Romantic Times Bookclub TOP AUGUST PICK 2007

It's The Lovely Bones meets Bridget Jones in this fluffy take on what happens after death. Holly Evans, an airy 22-year-old recently deceased by supposed suicide, lingers in Heaven's "Level One, having to put up with all of the horrid rejects while people like her parents were up on Level Three probably wearing lovely white togas and bathing in chocolate." Luckily, her afterlife "spiritual realigner" (think: shrink) sends her back to Earth for two days to purge her soul, clear up the circumstances surrounded her alleged suicide and confess to her boyfriend Todd that she wants to marry him. The catch? Her vessel is Vince Murphy, a guy from the IT department. As the clock ticks, Vince and Holly psychically chat in Vince's head while ticking off the items on Holly's to-do list. The peachy conclusion isn't unexpected, but it's not quite expected either. It's a fun, witty traipse through the afterlife.
Copyright © Reed Business Information, a division of Reed Elsevier Inc. All rights reserved.
Posted by Donna Fasano at 5:00 PM