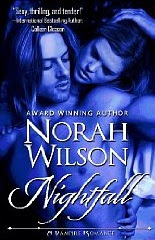 Aiden Afflack (a vampire) is as charming, sexy and easy-going as he is gorgeous. Unless you happen to be a rogue vampire, in which case he’s apt to be the last thing you see. Sam Shea is a wildly successful nature photographer whose prescient dreams lead her to some of the world’s most turbulent, awe-inspiring weather phenomena.

Sam has a deep-rooted aversion to having her powers exploited, but once her eyes have been opened to the lives she can help save, she can’t withhold her cooperation. But she can deny Aiden the other thing he wants from her, which makes her unique among women. And absolutely irresistible to Aiden!
Posted by Donna Fasano at 5:00 PM