Princess of Bretagne by Vijaya Schartz 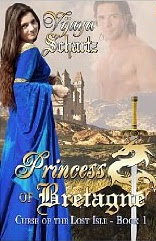 THE CURSE OF THE LOST ISLE

From history shrouded in myths, emerges a family of immortal Celtic Ladies, who roam the medieval world in search of salvation from a curse... but if the Church ever suspects what they really are, they will be hunted, tortured, and burned at the stake.

806 AD - Alba (Ancient Scotland)
As the Vikings raid the coast of Alba, Pressine of Bretagne sets out to seduce King Elinas of Dumfries, chosen by the Goddess to unite the tribes against the foreign invader. Elinas, still mourning his departed queen, has no intention to remarry. Head strong and independent, Pressine does not expect to fall for the very attractive, wise and noble ruler... Furthermore, her Pagan nature clashes with the religious fanaticism of the king’s Christian heir, who suspects her unholy ancestry and will stop at nothing to get rid of her.
Posted by Donna Fasano at 7:00 AM