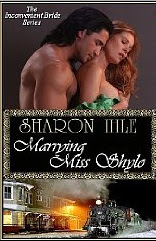 Shylo McBride never thought her little fib about being related to the president would result in a proposal from Dimitri Adonis. He certainly was as stunningly handsome as his Greek god namesake, but Shylo had no real desire to marry—all she wanted was a ticket out west so she could find her mother.

Dimitri had his own less than noble motives for posing as a wealthy aristocrat and seducing an American debutante. While he and Shylo struggled with their tangled web of lies, they discovered that beneath their deceptions lay true love’s sweet embrace.

Abandoned by their mother as children, Shylo and her younger sister Cassie decide to run away from their life as orphans and head out in search of her. Knowing she is out west Shylo knows that money is needed to fund their search. What better way to obtain it than to associate with the upper class, so Shylo poses as the President's niece and Cassie as her maid. Meanwhile, Dimitri Adonis is also in need of funds to help keep his business alive and to search for his Uncle whom he believes embezzled funds and thus put the business in debt. What better way to obtain it than to marry a woman with money, and Dimitri has set his sights on the President's niece! One lie begets another, and one adventure leads to another as the group head west is search of their own private causes, neither one telling the other the whole truth. One interesting twist is when the train is held up and Cassie is kidnapped by a not-really-a-bad-guy sort of bandit whom she falls in love with and plans to meet in San Diego. When they finally arrive in San Diego, Shylo does indeed meet up with her mother, who happens to be married to Dimitri's uncle! As with all lies, they never stay secret for long, and once everyone's cards are on the table each pair seems to work out their differences, one way or the other! Not really written as a comedy, Ms. Ihle provides an entertaining romp through adventures propelled by one lie after another. She also provides wonderful secondary characters that follow the same pattern of lightheartedness.Witty, lighthearted entertainment from one little white lie to another! Delightful entertainment is the key here, never a dull moment, always a smile! Ms. Ihle continues to delight readers with tales of adventurous romps that leave you smiling long after the last page is turned! Diane Potwin -- Copyright © 1994-97 Literary Times, Inc. All rights reserved -- From Literary Times