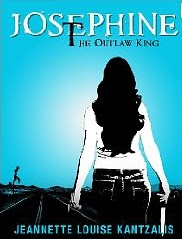 Josephine Lilliwhite, a middle-aged woman with a quiet demeanor and a curious past, happened upon love and motherhood late in life. In her early forties, she found herself starting over with a new love, a new home, and a second son on the way. It seemed she’d finally found herself a little bit of that light she’d only felt while watching the old movies she was so fond of.

And with that light came the dark.

Upon hearing about Josephine’s newfound joy, her jealous ex fills with an anger that can only be drained by her death. With a promise and a lie, he lures her to the edge of town. As he whispers, “Congratulations” into the forgiving ear of his former flame, he spits out a bullet from his unforgiving gun.

As Josephine lay there seeping into the dirty-sugar sand, she makes a promise to not empty out, to not end. She makes a perfect vow to her sons and to her love to begin. To rise. To ignite. To reign as the Outlaw King.

A true royal of the new and wildest west, Josephine finds her courage in the pulpy noir-ish underground of the southern California haunts she grew up around. She slithers and soaks into the shadows of the the biker bars, the betty brothels and the borrowed beds of the truly broken-hearted. There, she heals anonymously until she’s ready to take back the kingdom that is rightfully hers.

In Josephine’s world, the landscape is as much a character as the Saint, the Monster, Baby Dagger, Cortez the Killer, The Black Knight Beauties and the lovely Penny-brides.

In this rhythmic tale you’ll find them all careening down the 10 East in their Daddy duds and Kitten couture. You’ll feel them beating hard under the sultry streets of this invisible kingdom they call the Inland Empire. They’re all here and they’re waiting.

Waiting for you.
Posted by Donna Fasano at 5:00 PM