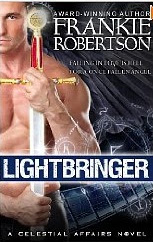 Jared Price is a Celestial, one of a race of beings often taken for angels. Exiled on earth, he's offered a chance to return to the Celestial Realm. All he has to do is protect Cassie Lewis from a demonic assassin.

A genuine psychic, Cassie can't resist Jared's Celestial aura, but she doesn’t trust him. He's hiding something behind his strong mental barriers and she's learned the hard way that what you don't know can hurt you. But when a demon tries to kill her, Cassie has no one else to turn to.

Then the stakes are raised even higher, and Jared must decide if Cassie's love is worth sacrificing a dream he's held on to for 150 years.

"Kept me guessing until the very end." ~Jordan Summers, author of Red, Scarlet, and Crimson

"Frankie Robertson creates detailed worlds, vivid characters, and intricate, well plotted stories. The mixture of fantasy and romance is perfectly balanced and an utter joy to read." ~Jill Knowles, author of Concubine and A Pirate's Primer

"Ms. Robertson combines a lush prose style with a sharp eye for characterization and detail. You will not be disappointed." ~Jody Wallace, award winning author of "Field Trip" and "Cooley's Panther"
Posted by Donna Fasano at 5:00 PM