The Mercenary's Marriage by Rachel Rossano 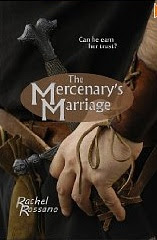 Trained as a mercenary soldier, Darius was a man of decisive action. He was also a man of compassion. Seeing a young slave woman about to become the spoils of war, he claimed her for his own. Marrying her before God and king, he made her a free and respectable soldier's wife.

Brice was born a slave. Abused and beaten, she learned quickly to avoid being noticed and to stay away from men. When her master's walls fell to enemy forces, she ran, but not fast enough. In Darius' offer she found deliverance, but experience had taught her to fear power such as his. Could she trust in his protection, or had she traded one form of slavery for another?

Praise for The Mercenary's Marriage:

"The story flowed like scenes from a movie. I could see the vivid descriptions of both the
characters and the background scenes." - Author/ Reviewer Marilyn Thompson
of Mind Fog Reviews


"I found the simple yet powerful message in this short book refreshing. Through the characters, we are taught the value of such traits as honour, compassion, justice and
meekness--a quality often misunderstood in today's selfish world that fails to
realize it takes far greater strength to be meek than to be a brute." - Laura Fabrini of Library of Clean Reads

"Despite there being so many characters and events in a shorter book it was wonderfully
written and gives a full story. It really sucks you in and brings you along on
an adventurous ride." - Jennifer Kitchens of Clean Romance Reviews
Posted by Donna Fasano at 5:00 PM