Ashes for the Elephant God by Vijaya Schartz 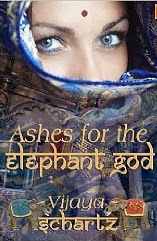 To scatter her brother's ashes over the Narmada River, Fabienne leaves France for the mysterious India of her childhood dreams. As she awakens to a newfound spirituality, unexpected visions of a former life during the Raj stir ancient yearnings for a long lost passion. Mukunda, the palace architect Fabienne loved a century and a half ago, lives again as an American engineer and works on the local dam project. As Fabienne falls in love again with India and the man of her destiny, the tapestry of her previous life unfolds. But, in the karmic land of the blue gods, a ruthless foe lies in wait. The Kali worshiper, who murdered the two lovers in a faraway past, has come back through the centuries to thwart their dream once more.

"... a broad-stroked, magnificent picture of a lavish India of the past and the present... a vivid tale of suspense... a gripping account of a woman coming to terms with heightened awareness... destiny." --The Book Reader

"... passionate... love, lust, faith and deception... a magnificent offering to the world of fiction..." --The Charlotte Austin Review