The Following Sea by Marsha Canham 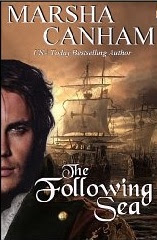 Look what we found! A Kindle Historical Romance Novel for under $4!

The Following Sea is the long-awaited and anticipated story of Gabriel Dante. Book three of the award-winning Pirate Wolf series which began with Across A Moonlit Sea and The Iron Rose.. The story takes place on the Spanish Main, with pirate attacks, high-seas adventure, lost galleons and sunken treasure, and of course, great romance from the author dubbed by Romantic Times as "the Queen of Swashbuckling Romance"

Ms. Canham's words come alive as you can almost smell the ocean and easily envision the majestic ships as they blast each other in their dangerous dance in battle. Just when you are wondering how Gabriel Dante (one of the infamous Hell Twins and son of Simon Dante, the Pirate Wolf) is going to survive his latest predicament, Ms. Canham oh so cleverly and with such panache, works her magic and Gabriel survives to fight another day. Our heroine, gently bred Evangeline Chandler, proves to be tenacious in her quest to locate her lost father, while still maintaining her sweetness despite the many betrayals and trials she faces.