Shades of the Past by Kathleen Kirkwood 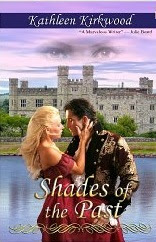 A Widowed Victorian Lady: Traveling companion to an elderly, aristocratic lady, Vanessa Wynters is drawn to Royal Sherringham upon her employer's death. Little does she expect to remain at the estate beyond the funeral itself, or to find herself caught up in the secrets of Sherringham’s turbulent past or those of the deceased noblewoman’s dark, brooding nephew ― Viscount Adrian Marrable.

A Mysterious Viscount: Twice wed and twice widowed, the darkly handsome lord is implicated in both his wives’ tragic and untimely deaths. Adrian is captivated by Vanessa’s golden beauty and willingly fulfills his late aunt’s dying wishes. His generous financial support allows Vanessa to remain at Sherringham and pursue her passion for photography. But her growing attraction to the enigmatic viscount proves as unsettling as the ghostly figure that appears in her photographs.

Royal Sherringham: An expansive castle-mansion complex in the English West Midlands, its long history dates back to the times of the druids. What mysteries does Sherringham hold, and why did Adrian’s late aunt flee her beloved home to live in self-imposed exile? Now, as the Marrable family gathers after years apart, Sherringham’s unseen residents stir. What might they reveal, if the planes between the spiritual and material dimensions are breached? Will Vanessa find an adversary or an ally in the otherworldly presence that beckons from her photographs as secrets are unearthed, shade by shocking shade? Dare Vanessa embrace her blossoming love for the dark viscount or, like her late employer, flee Sherringham forever?

"It is not so often that I come across, in my opinion, such a great Victorian Gothic mystery ! I have found here, absolutely everything I could hope for and beyond ... Hidden family secrets, scandal, passion, jealousy, deception and murder, a very nasty constable and a Ghost !" 5-Stars - AC, on Amazon
Posted by Donna Fasano at 5:00 PM

Email ThisBlogThis!Share to TwitterShare to FacebookShare to Pinterest
Labels: Gothic Romance, Historical Romance, Kathleen Kirkwood, Kindle, Shades of the Past