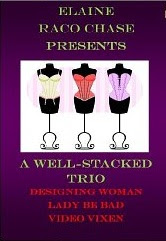 Look what we found! Three Kindle Romance Novels in one for under $3!

Why three with one press of the whispernet button! These three women are HOT! And these three men are very BOTHERED! Enjoy three sexy, sassy romantic comedies in one download!

Meet Brandy Abbott - as potent as the liquor that echoes her name. And when this woman gets branded a tramp...why what else can she do, but go above and beyond to make the man who did the branding pay!

Meet Griffen St.Clair - he thought he could handle her and not get burned. But he quickly found out that Brandy was a force to be reckoned with and he wasn't giving up on the idea that he could reform her.

Her ex-husband, Noah Drake, had the answers.

And she didn't mind showing up at his engagement party and making a scene. Or climbing back into his bed.

Victoria Kirkland played the most sinful, wanton woman on cable TV - Vixen Mallory. But was she?

The perfect way to steam up your Kindle just touch of the whispernet download! Three full-length romantic comedies sizzle their way inside. Sexy, Sassy, and So Much Fun! Yes, you can buy each title individually - but here's the perfect opportunity to enjoy this Well-Stacked Trio of Sensuous Women at one time!