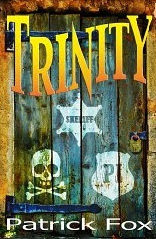 
In the US Store

In the UK Store

When Ben Rider finds his childhood imaginary friend, Trinity, in his kitchen, he knows something isn't right. Trinity hasn't changed a bit. He still has three personas: cowboy, pirate, and private eye. He still smells of chocolate, and he still has a habit of massaging his earlobe.

Ben is trying to keep his video game development business alive and finalise a deal with an American games publisher, while keeping his disintegrating marriage together. Now, with the reappearance of his imaginary friend, he has his sanity to worry about too.

Trinity claims he has come back to help Ben sort out his life and guide him to his destiny. But over the days that follow, Ben's life goes haywire, and it looks like he might meet his destiny sooner than he thinks. Thanks to Trinity, Ben will have a restaurant collapse on top of him, be seduced and later shot at by a Welsh femme fatale, meet someone else's imaginary friend, and lose both a wife and an ex-wife. But will he find his destiny, or is Trinity's real reason for returning, something else entirely?

"'Trinity' by Patrick Fox is more than a rom-com. It's a right old rom-romp." 5-Stars, Allie Lo, Amazon

"This is a feel good book, with some very funny moments along the way. I think a sequel is in order, as I would happily spend more time with Trinity." 5-Stars, K. Preston, Amazon
Posted by Donna Fasano at 5:00 PM