The Merzetti Effect by Norah Wilson 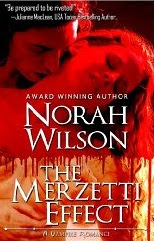 Look what we found! A Kindle Vampire Romance Novel for under $1!


Delano Bowen has been a medical doctor for a very long time. More than 170 years, in fact. For much of that time, he’s been searching for a way to reverse the curse foisted on him by a vampress who sought to own him. With the emergence of medical technology, he now also aims to develop a vaccine to protect the vulnerable from predation by rogue vampires. After a century of searching, he thinks he's found the key to his vaccine – a surviving descendent of the Merzetti family. The Merzettis were virtually hunted to extinction over the years by rogue vampires who feared the anti-vampirism properties in their blood.

A foundling, nurse Ainsley Crawford has no idea that she carries a genetic gift, and Delano aims to keep it that way. He must keep her close, and ignorant, for he can leave nothing to chance. He manipulates events to ensure her unwitting cooperation. But when Delano's arch enemy Radak Janecek mounts an all-out assault to destroy Delano and the fruits of his research, Delano is forced to draw Ainsley even closer to protect her. Inevitably, the attraction that has sparked between them from the first flares hot and urgent. Ainsley sees no reason why that attraction shouldn't be consummated, but Delano knows succumbing to it is not just ill-advised; it could literally be the death of him.

"Be prepared to be riveted. The Merzetti Effect is a gripping, exhilarating read that carries you along at an electrifying pace until the very last page."
--Julianne MacLean, USA Today Bestselling Author