Shot Through the Heart by Niki Burnham 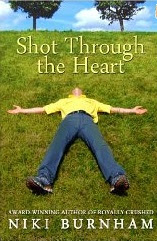 At Eastwood High, love is a battlefield.

From the RITA-Award winning author of ROYALLY CRUSHED and SCARY BEAUTIFUL, an all-new romantic comedy!

Senior year? It's all about Senior Assassin, a yearly water gun tournament where the last team standing receives a cool two grand. Connor wants nothing more than to split that prize with his best friend, Josh. When their mission is put in jeopardy by Molly--thanks to her crush on Connor--Josh comes up with a plan to thwart her, one that involves his sister, Peyton...

Peyton's deepest desire is to score entry to MIT. She's working her tail off to achieve her goal, but when she's dragged into Connor and Josh's water gun tournament, their antics threaten to leave her high and dry. As Peyton's forced to choose between chemistry class and chemistry with Connor, will the super student and the super athlete discover they have more in common than they imagined?

One thing's for certain: When Connor, Peyton, Josh, and Molly load their weapons, someone's bound to get shot through the heart.
Posted by Donna Fasano at 5:00 PM