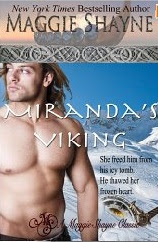 Look what we found! A Kindle Romance Novel for under $5!

MIRANDA’S VIKING, winner of the 1994 GOLDEN LEAF AWARD, is the book that launched Maggie Shayne’s reputation as an author of “the weird stuff,” and began to define the genre that would soon become known as Paranormal Romance.

When Professor Miranda O’Shea uncovers the perfectly preserved body (and what a body!) of the legendary Viking known as The Plague of the North, the last thing she expects is that he isn’t quite dead.

Frozen for 9 centuries, Rolf Magnusson awakens to a strange new world, and a woman who is more in need of thawing than he had been. Dark forces conspire to take what is theirs–including his long hidden plunder and their very lives! Miranda seeks to uncover the secrets of her warrior’s past while Rolf works to awaken her wounded, wary heart to the passion she doesn’t know she’s capable of feeling.
Posted by Donna Fasano at 7:00 AM