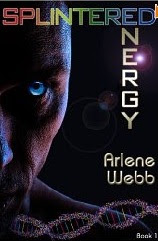 Look what we found! A Kindle Science Fiction Romance Novel for under $4!

aves of pure energy are quite happy hanging in the cosmos, traveling at the speed of light to brighten up the sky--until dawn breaks. Literally.

When sentient light fractures, it zaps into human bodies and becomes trapped. Without any memories to guide them, a handful of confused beings whose skin tones are now specific colors, struggle to understand humanity while it's quite clear they shouldn't be in this world. The few humans clued in to Earth's invasion don't flutter, but are drawn to their fiery fate with hearts wide open as they fight to survive.

California. A widower's twelve-year-old son is rather young to bring home a woman, especially a collapsed green beauty too frightened to open her eyes.
Arizona. A divorcee blinks hard, but the gorgeous red guy stepping in front of her car is still red. She swerves to avoid hitting him and ends up in the ditch. When she comes around, she wonders which layer of hell she's fallen into.
Ohio. A teen also fears he's dealing with the demonic, but no matter how dangerous things become, he's determined to stand by a man with inhumanly blue eyes.

Splintered Energy is an Earth based sci-fi/suspense/romance novel and the first in a four book series. Book 2, The R Word, and book 3, House of Seven, are available. The final is scheduled for March/April 2012.

"Splintered Energy truly is a quite unique and fun story. Sentient light splintered and trapped in human bodies with all the turmoil of emotions makes for sometimes hilarious, sometimes heart-wrenching encounters and situations. Filled with fascinating characters, real humans and colorful rays of light, Splintered Energy is a beautifully written, fun read about human nature."

"Imagine a book where the main characters all die before the first page. Yes, it's all that innovative. The innocent aliens who get trapped in the 'dead' bodies struggle against their own natures as well as human civilisation while they fight find ways to save themselves. A great read."
Posted by Donna Fasano at 7:00 AM