Wings of Freedom by Ratan Kaul 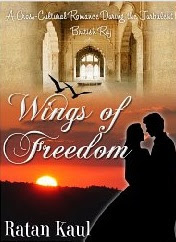 Look what we found! A Kindle Historical Romance Novel for under $3!

A cross-cultural romance set during the fury of British imperialism and the social-cultural divide in early twentieth-century turbulent British India.

It’s the year 1911. King George the Fifth is due in Delhi for his coronation celebration. A devastating fire in the royal camp gives rise to speculations of sabotage and an assassination attempt by the Indian revolutionaries. Will the British police be able to unveil real cause of the blaze?

Raju, a college student, struggling to establish his identity in the charged atmosphere of India’s freedom struggle is caught up in the vortex of violent passions as two of his innocent friends are made scapegoats for the blaze by the British police and murdered. Thus begins Raju’s relentless journey against colonial rule and the economic exploitation of India.

A passionate romance with Eileen, the daughter of a British officer, keeps Raju inspired in their roller-coaster ride against the backdrop of British imperialism, turbulent political conflicts, the fury of the freedom revolution, the catastrophic first World War and the racial, cultural and social divisions in the post-Edwardian era.

“Set against the turbulent backdrop of India’s struggle for freedom from English rule at the start of the twentieth century, Wings of Freedom by Ratan Kaul is a compelling mixture of drama, romance and history. Raj, a young Indian man, and Eileen, a young English woman, fall in love despite the societal pressures against it, and in spite of the revolution swirling furiously around them. If you enjoyed The Far Pavilions by M. M. Kaye, you’ll love Wings of Freedom.” ~Elizabeth Delisi, author of Lady of the Two Lands, USA
Posted by Donna Fasano at 7:00 AM