Together in the Night by Candace McCarthy 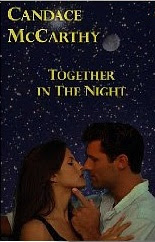 Look what we found! A Kindle Romance Novel for under $1. Together in the Night by Candace McCarthy.

Find it in the US Kindle Store.

And in the UK Kindle Store.

Sparks fly when Breana Dobson, owner of Dobson Books, begins an on-the-air battle with WSAM's annoying, obnoxious radio talk show host Monty White. Listeners tune in eagerly each night to enjoy the clash of "Firebrand" and the "Salisbury Slime." Shea Montgomery is a zoologist working to finish his thesis. He took the job of "Monty White" as a favor to his brother, who needed someone to fill in at the radio station for a while.

Fascinated with "Firebrand," Shea uses his connections to learn her identity and then visits Dobson Books. The attraction between Shea and Breana Dobson is instant. Shea falls for the beautiful feisty redhead, but Breana has no idea that Shea is Monty White. How can Shea tell her that he is the man on the radio who infuriates her? And how can he not if he is to pursue his relationship with the woman who has come to mean a great deal to him?