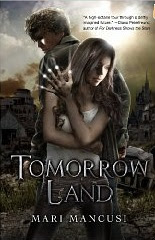 Can true love survive the end of the world?

Imagine finding your first love, only to be ripped apart by the apocalypse. Peyton Anderson will never forget the day she was forced to make a choice--between her family--and Chris Parker, the boy she'd given her heart. And now, four years later, as she steps from the fallout shelter and into a dead and broken world, he's the only thing on her mind.

All Chris "Chase" Parker wanted was to take Peyton away and keep her safe from harm. But he waited for hours in the rain on judgment day and she never showed--breaking his heart without ever telling him why.

Now the two of them have been thrown together once again, reluctant chaperones of a group of orphan children in a post-apocalyptic world where the dead still walk...and feed. As they begin their pilgrimage to the last human outpost on Earth, can they find a way to let go of old hurts and find the love they lost--all the while attempting to save what's left of the human race?

"An apocalyptic coming of age futuristic romance that does the horror film genre proud."
-- PNR Reviews

"There is action, there is love and there are zombies. What more can you ask for?"
-- Book Binge

"Marianne Mancusi has returned with an edgy all-new tale, filled with fast-paced action and a heroine strong enough to mold her own destiny."
-- SF Scope