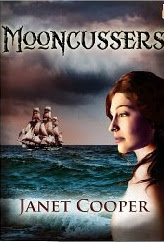 Amanda Browne Stewart's husband died after being illegally impressed by the British. She hates the Royal Navy and has devoted her life to caring for her small family and assisting her father with his patients.

When Zachariah Addams washes ashore near Amanda's home in New Jersey wearing a coatee of a British naval captain Amanda realizes that the shipwreck that brought this man ashore is not an act of nature. The Mooncussers, a local band of wreckers, has struck again. Should she save this man who might cause problems for her family or allow the sea to reclaim him?

"Janet Cooper's lastest historical romance adds a bit of mystery to a fast-paced tale about the early days of the Coast Guard. You'll love her heroine, a colonial widow who's also a mid-wife who rescues the hero after a terrible NorthEaster hits the East coast..."

"I really enjoyed this story - great character conflict and interesting historical details made this plot come alive. Going to look for other books by this author!"
Posted by Donna Fasano at 5:00 PM