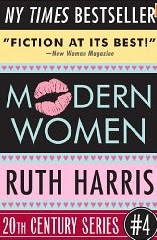 Beginning with the assassination of John F. Kennedy in Dallas, Texas on 11/22/63, MODERN WOMEN is about three women—and the men—who live and love during these dramatic and exciting times.

Lincky Desmond: She marries Mr. Right—only to risk it all for Mr. Wrong.

Elly McGrath: She is loyal and idealistic but when faced with the ultimate betrayal, will she be able to stand up for herself?

Jane Gresh: Bawdy, talented and determined not to be ignored, she manages to shock the entire country.

Owen Casals: Handsome, successful, magnetic. He marries one, betrays another and makes one of them very, very rich.

"Best book I have read in ages! Laugh-out-loud funny in places, touching in others. So enjoyable it's no wonder it was a bestseller." —Customer Review

DECADES (20th Century Series, Book #1) Spanning the years from the 1940’s to the rebellious “Make Love, Not War” 1960’s, DECADES is the emotional story of a marriage, a family and three generations of women facing the challenges of their turbulent times.

HUSBANDS AND LOVERS (20th Century Series, Book #2)—Carlys Webber's lonely and insecure beginnings are in the past but her future is threatened when her loving husband turns into a stranger and she is tempted to find comfort in the arms of another man.

LOVE AND MONEY (20th Century Series, Book #3)—Rich girl, poor girl. Celebrity, outcast. Sisters and strangers. They do not know of each other’s existence and might never have met until their worlds collide when fate—and murder—bring them face to face.

THE LAST ROMANTICS (20th Century Series, Book #5) is a passionate and sweeping love story set in the glittering capitals of Paris and New York in the 1920's. If you loved MIDNIGHT IN PARIS and THE PARIS WIFE, you will love THE LAST ROMANTICS.

About the author:
A New York Times bestselling author, Ruth Harris's novels have sold millions of copies. Translated into 19 languages and sold in hardcover and paperback editions in more than 30 countries, Ruth's books were Literary Guild, Book-of-the-Month Club and book club selections around the world.