Ghost of the Thames by May McGoldrick 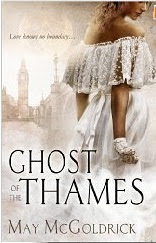 From opium-drenched hovels and rat-infested warehouses of Limehouse to the glistening facades of West End mansions, a woman—known only as Sophy—searches for her identity. But the mist-shrouded alleys of Victorian England hold grave dangers for the friendless.

Captain Edward Seymour, the last of a long line of distinguished Royal Navy officers, is searching, as well. Returning from sea to find that his niece has disappeared, he begins combing every inn and hellhole of the city’s darkest corners, desperately hoping to find some trace of the girl.

No one knows the streets of London like Charles Dickens, a young novelist with a reformer’s soul, and Sophy and Edward turn to him for help. Flush with his early literary successes, he is working hard to use his knowledge of the city and his newfound fame to right some of the social ills that plague Victorian England.

But with each step they take toward the truth, Death draws ever closer…

Email ThisBlogThis!Share to TwitterShare to FacebookShare to Pinterest
Labels: Ghost of the Thames, Historical Romance, Jan Coffey, Kindle, May McGoldrick