Rule Number One by Nan Reinhardt 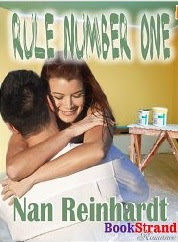 Decorator and home stager Katy Ruth Gilligan has sworn off men. She's been married to two no-good, cheating weasels, so when handsome book publisher Jack Walsh shows up on her doorstep and pretends to be her hired escort, she's not one bit amused. Jack's back home from traveling the world as a journalist, ready to take over as CEO of his family's publishing business. Not only does he want to hire Katy's firm to renovate his family's historic building, but he's also very interested in exploring the attraction between them. At first, she's humiliated and furious, but the job will put her on a fast track to success. Despite the fact that she's drawn to her new client, Katy’s determined to protect her heart. Can Jack convince her that the third time's a charm? ** A BookStrand Mainstream Romance

"This is a great book with a hero and heroine who aren't the typical young romance characters. Katy and Jack are so real, and their chemistry sizzles. A great debut novel. I'll be looking for more from Ms. Reinhardt in the future."

"Nan Reinhardt's debut is nothing less than fun! And if you're a fan of Irish pubs (who isn't)and delicious hunks (who isn't?), there's really no way you can go wrong with this. Katy Ruth Gilligan is a wonderful heroine and Jack Walsh is...oh, my. The supporting cast is terrific, too, and Nan could find lots of stories in them to tell (even though some of them are already married.) No less satisfying than Katy and Jack's story is Muriel and Doyle's. My only regret is that it was such a fast read!"