Paths of Desire by Shannon Donnelly 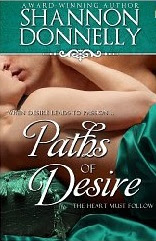 "Donnelly (Cat's Cradle, 2011, etc.) spins a sizzling regency-era romance about an actress seeking security and a married adventurer who can give her anything but."
-- Kirkus Reviews

She wants a rich lord for a husband--she won't end like her mother, abandoned and broken.


NO WOMAN'S FOOL...
He wants to prove to his friend she's the wrong woman--he knows too well the pain of a bad marriage.


WHEN AN ACTRESS CROSSES PATHS WITH AN ADVENTURER IN 1813 LONDON...

With too many secrets in her past, and too little future as an actress, Theodosia Newell wants one thing more than all else--security. She's seen her mother abandoned, her younger brother die, and she's vowed never to be poor. But then her path crosses that of a man who tempts her to abandon caution and all thought for the future for a passionate affair. Can she find the courage to break from her deepest fears? And will her love prove enough to save them both?


Born with a soul for adventure, David Llewellyn cannot resist a challenge--and his enthusiasm for life is as magnetic as his personality. But two women share his life, and only one can be his. Will his stubborn refusal to make a choice between them lead him to lose everything? Or will he find, in the journey to the lost city he dreams of discovering, a path to a deeper love than he thought possible?