The Night Before Doomsday by Linda Nightingale 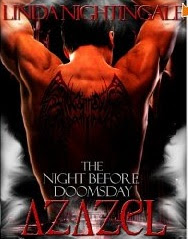 In Genesis, "The sons of God saw that the daughters of men were fair; and they took wives for themselves from those who were pleasing to them."

Azazel was a leader of the Grigori, the angels sent to Earth to teach Mankind after the oust from Eden, how to survive in a less hospitable environment. Nine-tenths of the Grigori fell from Grace, but was it love or lust?

This novella presents the Grigori's tale in first person from Azazel's point of view--the temptations, his struggles and the final realization that Heaven doesn't speak to him anymore.

"I just finished reading this story and was unable to put it down until I reached the end. It kept me guessing right through to the end. It is very sensual without being overtly sexy. I learned a lot about the lore surround angels from this story. If you like Angels or fallen angels this is a good starting point. "

"Tempt an angel to sin? Would you? Could you? I must say the only thing wrong with the story was that I wasn't there. I have read everything else by this author and this one did not disappoint. I loved the lush language typical of her work."
Posted by Donna Fasano at 7:00 AM