Husbands and Lovers by Ruth Harris 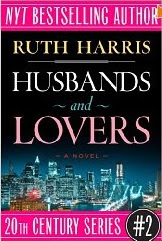 Spanning the years from the 1970's  to the prosperous, exuberant 1980's, HUSBANDS AND LOVERS is the compelling story of partially orphaned Carlys Webber and her search for love and a place to belong.

Carlys's lonely and insecure beginnings fade into the past when, to her own surprise, she is hired by a celebrity Public Relations firm and falls in love with its handsome, brilliant leader. They marry, but Carlys's future is threatened when his buried past turns him into an angry stranger. She is tempted to find comfort in the arms of a romantic architect--even though she knows the consequences can destroy everything she ever dreamed.

"Harris's empathy for her women, especially the ugly duckling who makes herself into a swan, adds a satisfying dimension of reality.  Steamy and fast-paced, you will be spellbound." --Cosmopolitan

" A brilliant book. Ruth Harris has all the insight of Joan Didion as she recreates the decades in which her heroines lived." --The Fort Worth Star-Telegram

DECADES (20th Century Series, Book #1) Spanning the years from the 1940's to the rebellious "Make Love, Not War" 1960's, DECADES is the emotional story of a marriage, a family and three generations of women facing the challenges of their turbulent times.

LOVE AND MONEY (20th Century Series, Book #3)--Rich girl, poor girl. Celebrity, outcast. Sisters and strangers. Lana Bantry and DeeDee Dahlen do not know of each other's existence and might never have met until their worlds collide when fate--and murder--bring them face to face.

MODERN WOMEN (20th Century Series, Book #4), a million copy New York Times bestseller, begins in Dallas, Texas with the assassination of John F. Kennedy on 11/22/63. MODERN WOMEN is about three memorable women who live and love during these exciting and tumultuous times.

THE LAST ROMANTICS (20th Century Series, Book #5) is a passionate and sweeping love story set in the glittering capitals of Paris and New York in the 1920's. If you loved MIDNIGHT IN PARIS and THE PARIS WIFE, you will love THE LAST ROMANTICS.