Against the Wind by Virginia Kelly 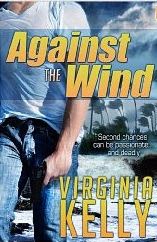 
"Against The Wind has non-stop action/adventure/adrenalin rush, from the tornado, to the hurricane, to the midnight boat rescue, to the car chases, shootings, knifings, kidnappings, never mind the sexual tension between Blair and Michal." "Loved the characters, the plotting, the pacing, the danger around every corner, and I'm sure readers will too." 5 Stars. Manic Readers

A man on the run...
FBI Special Agent Michael Alvarez, falsely accused of fraud and murder, is determined to clear his name and survive attempts on his life, even if it means depending on

The woman who rejected him...
Society girl Blair Davenport refused Michael's marriage proposal six years ago, knowing she couldn't cope with the secrets and dangers of his career. Now she has a chance to make it up to him, but neither can ignore

The passion that blazes between them..
Despite the past hurt, they're tempted more than ever, and there's

A relentless pursuer..
Blair's brother, FBI Special Agent Drew Davenport, hot on Michael's trail, won't let a hurricane stop him. Is he simply doing his job? Or is he behind the attempts on Michael's life?

An emotional adventure of romance and suspense, AGAINST THE WIND proves that second chances can be passionate--and deadly.