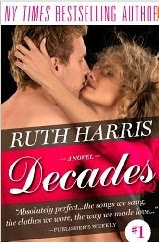 DECADES - Book #1 of the 20th Century Series - is the intimate story of a passionate triangle and is set during the pivotal mid-century years reaching from the end of World War II to the rebellious "Make Love, Not War" 1960's. Written by NY Times Bestselling Author Ruth Harris.

Evelyn is a loyal and loving wife.

Nat is her successful but restless husband.

Joy is their daughter, torn between them.

Barbara is the other woman, divorced and desirable, who thinks she can have everything--including another woman's husband.

And is she willing to pay the price?

"Ruth Harris has achieved a very salable novel that will have three generations of American women reliving their love lives and recognizing ruefully and with wry affection just what changes have overtaken them. The characterizations are good and the period atmosphere absolutely perfect -- the songs we sang, the clothes we wore, the way we made love." --Publisher's Weekly

"Ruth Harris has re-created both the style and substance of three decades of American life -- from the bobby socks and innocence of the Forties, to the crinolines and caution of the Fifties, to the bra-less T-shirts and alienation of the Sixties." -- Book-of-the-Month Club

"A terrific novel about love between a singular single girl and a married man." --Cosmopolitan

"Three generations of women are succinctly capsuled in this novel by a writer who has all the intellect of Mary McCarthy, all the insight of Joan Didion. Rarely have attitudes been so probingly examined -- but Ruth Harris is even more merciless in her examination of the male of the species.

"Tough, trenchant, chic and ultra-sophisticated, Ms. Harris also recreates the decades in which her heroines lived, from zoot suits and Sammy Kaye, through Eisenhower, Elvis and poodle-cut hairdos to moon walks, Mick Jagger and micro-minis.

"A brilliant book. Few will fail to be entertained and few will be able to forget what it has to say about men and women and the games people play." --Fort Worth Star-Telegram

"I read DECADES straight through at one sitting and the more i think about that, the more impressive the novel seems." -- Houston Post
Posted by Donna Fasano at 7:00 AM