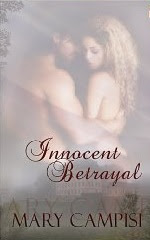 Also in the NookBook Store

English noblewoman Emily St. Simon wants nothing more than to escape the constraints of a society that demands she turn in her breeches and secure a husband. She cares nothing about men or love until she encounters daring sea captain Noah Sandleton, a man who steals her heart and her innocence with searing kisses and bold touches.

Noah Sandleton sails the sea avoiding anything that resembles commitment--until he meets the golden-haired temptress with a will to match his own. One night of passion binds them together, but a debt of honor forces Noah to abandon his bride. When he discovers Emily is caught in a dangerous game of intrigue, Noah devises a secret plan to return to her side, where he will risk his life to protect her and earn the chance to rekindle the greatest love either has ever known.

"It came as a surprise that this is the work of a brand new novelist, not only because of the marvelous writing, but also because there were hints of a previous story involving the older brother Ian and his wife, Augusta. If there is indeed a "prequel" or a sequel (perhaps involving the other brother), you can be sure I will be first in line!"

"There is so much about this book that is wonderful and outstanding. I could not put it down."
Posted by Donna Fasano at 7:00 AM