The Marriage Bargain by Sandra Edwards 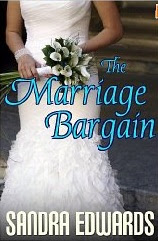 For a limited time, THE MARRIAGE BARGAIN is value priced. Grab it before the price increases to $4.99.

Camille Chandler is a tabloid journalist whose career is right on track--until her boss sees a curious ad in the L.A. Trades.

France's mega-rich playboy Julian de Laurent is up to something and Camille's boss expects her to find out what. Who knew the eccentric gazillionaire was looking to hire a temporary wife?

When Camille refuses to accept Julian's proposal--and secretly write a juicy tell-all about the de Laurent family--she's fired and left financially destitute, forcing her to entertain Julian's proposal for real.

But what'll happen at the end of the contract period, after Camille has spent six months as the wife of a man she learns is capable of stealing her heart?

**This is a re-release of The Marriage Bargain, originally published in August, 2010. This version has an ALL NEW ending.**

"The Marriage Bargain is for anyone who loves a good love story. A real fairytale romance with totally engaging and likeable characters. Camille has problems. Her honesty propels her to refuse a job she feels is dishonest. Her refusal gets her fired. Julian needs a wife for only six months to get his father off his back about marrying, something Julian doesn't want. What starts out as a business arrangement between Camille and Julian becomes something neither of them could imagine. As they get to know one another, they see the good in each other, not to mention the sparks that fly between them. I loved this story and loved how Ms. Edwards resolved all the conflicts to a very satisfying end."

"This was a great story! Ms. Edwards weaves a story of jealousy, love, and deception all into one amazing tale. I'd highly recommend this story, taking the reader to different locales on a romantic roller coaster of love. If you love Harlequin romances, you'll enjoy this book!"


Bringing you the best romance books on the web!