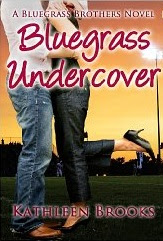 This is the first book in the Bluegrass Brothers Series, a follow-up to Kathleen Brooks' Best-Selling Bluegrass Series.

In her first follow-up to the Best Selling Bluegrass Series, Kathleen Brooks brings Keeneston back to life through the Davies Brothers. Cade Davies had too much on his plate to pay attention to newest resident of Keeneston. He was too busy avoiding the Davies Brothers marriage trap set by half the town. But when a curvy redhead lands in Keeneston, the retired Army Ranger finds himself drawn to her. These feelings are only fueled by her apparent indifference and lack of faith in his ability to defend himself.

DEA Agent Annie Blake was undercover to bust a drug ring hiding in the adorable Southern town that preyed on high school athletes. She had thought to keep her head down and listen to the local gossip to find the maker of this deadly drug. What Annie didn’t count on was becoming the local gossip. With marriage bets being placed, and an entire town aiming to win the pot, Annie looks to Cade for help in bringing down the drug ring before another kid is killed. But can she deal with the feelings that follow?

"I loved the humor in this book. There was humor in all the books, but it really shown through in this one, and I could feel the emotions rolling off of each person. I was tense during the football games, cheering when she kicked some butt, and laughing during the facials. I loved this story and highly recommend to anyone who loves more than a romance story. I love my romances to go on and on, and I will be on pins and needles until the next in this series comes out. Let's all just tie Kathleen Brooks to her desk until the entire series is complete."

"Love those southern gals! And fellas too of course.You just feel like you have been added to the family with the characters."