Cooking Up Love by Candace Shaw 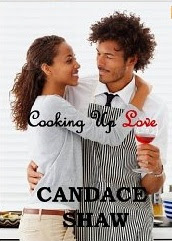 What happens when a suave, handsome chef meets a cute, sassy food critic?

When Shelbi Arrington accepts a position as a food critic in the hopes of burying her medical career and foregoing her residency, the last thing she’s searching for is love. However, that’s just what the doctor ordered especially when she lays eyes on the handsome chef, Justin Richardson. While sorting out her secret conflict of continuing her medical career, she falls for his mouth-watering charm, leaving her hungry for anything he has to offer.

Justin is leery of doctors because a doctor’s negligence caused his mother’s death when he was twelve. He has put his focus and energy into his restaurant, which had been a dream he and his mother shared. Justin is immediately smitten by the cute, sassy food critic that has him cooking up different ways to please her appetite. But when things start to heat up, Shelbi learns of a shocking revelation that could extinguish the flame of their relationship. Will Justin be able to forget his pain and commit to the woman who has stolen his heart?

Cooking Up Love is the first book in the Arrington Family Series.

"This was my first read by Candace Shaw and I really enjoyed this book! This was a great romance story about a sassy food critic name Shelbi and a hot sexy restaurant owner name Justin. The chemistry between the two was off the charts from the very beginning giving this book a great story line. If you are into GOOD contemporary romance stories then this is the book you need to read! I am really looking forward to reading more books by Candace Shaw. You have a new fan! Job well done!"

"I really liked Justin and Shelbi and thought they had great chemistry. Loved the foodie theme - she being a food critic for a newspaper (while trying to figure out if she was going to pursue her other vocation) and he a restaurant owner/chef. If I had a complaint, it would be that I thought Justin would have realized who Shelbi's father was sooner - only because I thought the last name wasn't that common. All in all, very sweet and I'm looking forward to the continuation of the series. I think that Bria and Rasheed's story should be a lot of fun - and I'm hoping eventually, all of the siblings will eventually be paired with their intended."