Of Fire and Brimstone by S.L. Baum 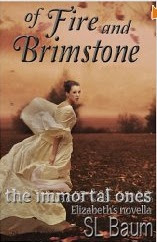 A Novella from The Immortal Ones series.

When Silas first saw the dirty little street urchin, Elizabeth, he was amazed by her intelligence and knew she would become a powerful Witch (as was he). When he found out that her life would entwine with his own, he welcomed her with open arms, because Silas never questioned his visions of the future.

Of Fire and Brimstone (The Immortal Ones - Elizabeth's Novella) tells of Elizabeth's early life... how her first powers emerged... and how she became the Witch that was introduced in My Link in Time. The novella consists of approximately 19K words.

Email ThisBlogThis!Share to TwitterShare to FacebookShare to Pinterest
Labels: Of Fire and Brimstone, Paranormal Romance, S.L. Baum, The Immortal Ones series, YA Romance, Young Adult Romance