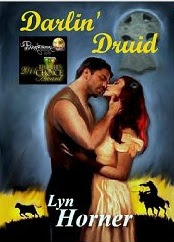 Set in the American West of 1872, Darlin' Druid is a tale of epic adventure, stormy romance and family strife, sparked by flashes of Druid magic. Jessie Devlin, a daughter of Irish immigrants and a survivor of the Great Chicago Fire, is descended from the "Old Ones," her mother's name for their ancient Druid ancestors. Gifted with second sight, Jessie suffers nightmares in which an unknown man saves her from burning to death. A prophetic vision convinces her the man truly exists and to find him she must look west. But will her quest lead her to love or into a deadly trap?

Captain David Taylor is a Texan who sided with the North in the Civil War, earning his father's abiding wrath. Now serving on the frontier, David longs for home and a family of his own. After a trip east, he encounters Jessie in the Omaha train depot. He's entranced by her beauty but has no taste for her firecracker temper. She brings to mind a ghost from his past who he'd rather forget. As the two journey westward, their clashing personalities war with fiery passion that threatens to overwhelm common sense. Violence dogs them along the rails and explodes amid the unexpected beauty of Mormon Utah and in an isolated mountain mining camp. Whether love will win the day or be lost forever is a question that hangs in the balance until the terrifying conclusion on the broad Texas plains.

"Fans of historical romance and possibly even those who are into westerns, sans romance, should find much to like in "Darlin' Druid." ~BigAl's Books And Pals

"I really enjoyed the book, the ending wasn't rushed but the book felt more like an action western and not so much as a romance novel. More interaction between Jessie and David would have been welcomed by this reader. I would definitely recommend this book to everyone." ~Review by Laura Wallace, Member Paranormal Romance Guild Review Team