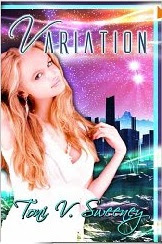 Gabriel Marsh, known as the Dark Angel, is a Federation assassin. An Angelus, he's been brought up with high moral standards and rigid ethics. When he meets Deirdre Karanov, a shy blonde with a penchant for black market coffee and strawberries, he's instantly smitten.

But Deirdre is a Variant, a type of human whose body can switch into a separate person of the opposite sex at will. She is at the mercy of her domineering Other, Lexei, another government assassin who uses her as a decoy to get near his targets.

When Marsh is partnered with Lexei for an assignment, he makes it his mission to free Deirdre from the chains of Lexei's dominance. But double-crosses, enemy soldiers, and Lexei's cruelty conspire to stop him. The more he sees of Deidre, the more Marsh realizes he can't live without her. But is his love enough to set her free?


Bringing you the best romance stories found on the web!