THE GOOD DAUGHTER: A Mafia Story by Diana Layne 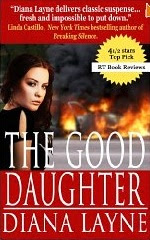 This is the Vista Security prequel.

Dave sat up straighter when she entered the bar. Sandro had promised the contact would have useful information and be immediately recognizable, but he never specified male or female. Was this his informant? Carlo Peruzzo's daughter. The Mafia princess herself.

Her gaze scanned the room until she saw him. Though her lips were pressed in a straight line, a sparkle flashed in her eyes as if she knew just how she had shocked him.Dave realized his heart rate had kicked up a few notches when their eyes had locked. His jaw would have dropped if he hadn't been the kind of guy trained not to show his emotions.

She walked purposefully toward him, making her way through the crowded tables. Black designer jeans hugged nice curvy hips, and her full breasts were covered with a pink plaid, pearl-button western shirt. Interesting color choice. A leather belt wrapped around her waist, and his focus narrowed. Best he could tell the belt was pink, too. And there were some kind of pink jewels inlaid in the buckle.

He hid a smile. The only thing that would complete the color coordination was if she had on-he looked down, yep, pink cowboy boots. Pretty-in-pink cowgirl-Mafia princess. That certainly wasn't an image he expected to see. With her head high, and her gaze fixed on him she seemed unaware-or unaffected-by the attention she garnered. And she certainly got a fair share of stares. He saw more than one man pause with a drink halfway to his mouth, head swiveling to keep track as she walked past.

Dave had never seen the high-and-mighty Mafia daughter in anything other than expensive business suits, with her hair pulled back and her makeup understated, but tonight she wore this chic knock-off cowgirl look well. With her dark wavy hair swinging free around her shoulders, her smooth olive skin glowing, and lips a luscious color of pink to match as well, she could raise the lust level in a saint.

Dave was no saint.

4 1/2 Stars TOP PICK!! : Calling this book "old-school Jackie Collins with a Gotti twist and enough heat to melt Alaska" still doesn't begin to describe how explosive it is. This is a turn-off-all-electronic-devices, one-sit read, with impressive characters, a transfixing plot and enough breathtaking action to knock your socks off! Layne has star power in spades.
~Diane Morasco, RT Book Reviews


"With THE GOOD DAUGHTER, Diana Layne delivers all the elements of a classic romantic suspense--fast pace, a layered and twisty plot, memorable characters and the perfect balance of sensuality. An exceptionally well-executed element of Mafia culture combined with a high level of danger make the book fresh and impossible to put down."
~LINDA CASTILLO, New York Times bestselling author of BREAKING SILENCE