A Knight's Vengeance by Catherine Kean 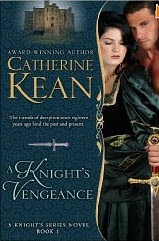 Book 1 of the Knight's Series

Geoffrey de Lanceau is a knight, the son of the man who once ruled Wode. His noble sire died, however, branded as a traitor. But never will Geoffrey believe his father betrayed their king, and swears vengeance against the man who brought his sire down in a siege to take over Wode.

Lady Elizabeth Brackendale dreamed of marrying for love, but is promised by her father to a lecherous old baron. Then she is abducted and held for ransom by a scarred, tormented rogue who turns out to be the very knight who has sworn vengeance against her father.

The threads of deception sewn eighteen years ago bind the past and present. Only by Geoffrey and Elizabeth championing their forbidden love can the truth - and the lies — be revealed about a knight's vengeance.

Kean (Dance of Desire) delivers rich local color and sparkling romantic tension in this fast-paced medieval revenge plot. Geoffrey de Lanceau was eight years old when he was orphaned, his father was branded a traitor and cut down by Lord Arthur Brackendale. Eighteen years later, Geoffrey puts his plan for retribution into action. His first step: abducting Lord Arthur's only child, Lady Elizabeth Brackendale. Geoffrey quickly realizes his high-born captive is no shy maiden but rather a fierce opponent determined to stop his plot. As their animosity turns to understanding, Elizabeth tries to convince Geoffrey that her father acted under orders of the king—an explanation Geoffrey refuses to hear. As the novel hurtles toward its nail-biting climax, the passion between Geoffrey and Elizabeth becomes love, the true villains are revealed and the innocent exonerated. Finely drawn secondary characters—a love-struck young squire, a practical herbalist, a lecherous suitor and a loyal battlefield friend—breathe additional life into the vibrant tale. (Sept.)
Copyright © Reed Business Information, a division of Reed Elsevier Inc. All rights reserved.