Fire and Ash by Anne Patrick 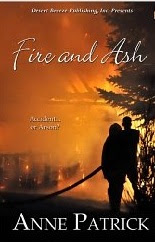 Fire Investigator Sadie McGregor has been called to her hometown of Emerald Point, Missouri to investigate a suspicious fire which claimed the life of a local college student. By appearance the fire looks like the girl was just careless. What Sadie and Sheriff Quinn Harrington discover will not only affect those close to them, but will rock the entire community of Emerald Point and put Sadie’s life on the line.

Sadie’s life isn’t the only thing at stake. Struggling with the guilt of having been responsible for the fire that killed her family, when she was only seven, Sadie doesn’t feel she’s worthy of God’s love and forgiveness. Will Quinn be able to prove otherwise before it’s too late?

'Top Pick' and a 5 star review from Night Owl Reviews

The Romance Reviews 'Best Inspirational of 2010'