The Role of a Lifetime by Jennifer Shirk 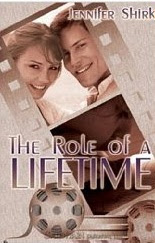 Sandra Moyer has a good reason to distrust actors. She was once married to one who left her and her child. However, she's desperate for publicity to help her struggling preschool. Hollywood playboy Ben Capshaw's request to access her classes to prepare for a role is an offer she can't refuse.

Sandra second guesses herself on that decision until she sees Ben in action with the children. Her apprehension turns to wonder, and then to feelings she'd thought were closed off forever. Yet how can she trust that what she's seeing is real?

As a boy, Ben learned that acting was the answer to everything. The role he's up for now will enhance his career and, he's sure, secure his happiness. But spending time with Sandra and her daughter stirs up emotions that—for once—aren't pretend.

Ben's ready for a lifetime role as husband and father—if he can convince Sandra not to typecast him.

"The Role Of A Life Time has some good times, bad times, and lots of sweet romance. It had good writing but I do wish that it had delved into the character's lives a bit more, for instance it would have been nice for Steve, the ex, to show up even if it had been a disaster. Other than that The Role Of A Life Time was great fun to read."

Email ThisBlogThis!Share to TwitterShare to FacebookShare to Pinterest
Labels: Jennifer Shirk, Kindle, Sweet Romance, The Role of a Lifetime