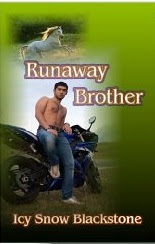 After his graduation from college, Nicolo Liguori’s three brothers elect him to become care-giver for their invalid father. For the next ten years, Nick gives up his own ambitions , working during the day in the family jewelry business in Vanderhoek, New York, and returning to the Liguori mansion every night, to be at his father’s beck-and-call. Then Papa dies and Nick is free…or is he? Carlo, Marco, and Pietro expect him to continue life as usual, but Nick has other ideas. Secretly he makes his escape plans, buys a motorcycle, and when he’s ready, starts to work one day and… disappears.

The two detectives assigned to the case think they’ve a pretty good idea why Nick’s now on the lam from his family and both develop an extreme case of sympathy for all he’s been through, but a man’s missing and the Liguoris have filed a Missing Persons report, so it’s their duty to determine if a crime was committed and where he’s gone.

Nick gets as far as the southern coast of Georgia before an accident disables his bike. Stranded, with no idea of the South except what he’s seen on TV, Nick isn’t certain of the kind of reception he’s going to get. Then, a pretty Southern miss and a white tank disguised as a temperamental horse named Shazam change his life as they and the citizens of Oceano teach a runaway Yankee about life and love in a small Georgia town. It doesn’t take long for the man from New York to discover there’s more to the South than odd accents and strange food combinations.