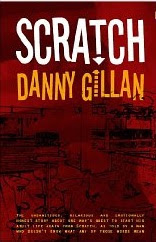 An unexpected reminder of his past prompts Jim Cooper, a 33 year-old Glaswegian call centre worker, to make a big decision. He’s going back to adulthood ground-zero - no job, no debt, no, er, home, and starting again. Maybe this time he can do it right and get the girl. The fact that the girl is already married and living in another country and her Bruce Lee obsessed dad apparently wants to turn Jim into his latest pet are only two of the obstacles he faces.

Given Jim's forward planning skills don’t extend beyond praying and having panic attacks, it isn’t surprising that he soon finds himself living with his parents and working for minimum wage, in the same pub he worked in when he was 18. What is unexpected is Paula Fraser walking through the pub’s door for the first time in 12 years. What’s even more surprising is that Paula admits she still loves Jim. But yes, she’s married, and no, she won't cheat on her husband. She'll tell him the marriage is over. Soon. When the time is right. As soon as her husband's sick grandfather gets better - or fatally worse.

And so, Jim and Paula embark on the tricky business of not having an affair, and not telling anyone they know that they’re not having an affair. As Jim reflects, ‘If not being physically intimate with her in any way and denying to everyone we knew that anything was going on between us was the best way to prove I loved her, then that’s what I would do.’

Scratch is an un-sanitised, emotionally honest and hilariously candid story about what it is to grow up as opposed to simply change age, as told by a man who doesn’t know what any of those words mean.


"I so enjoyed this story. It was entertaining and funny, thought-provoking and poignant. In this current economy, I can easily see this story unfolding in the real world."
~Donna Fasano, founder of Kindle Romance Novels blog

"Author Danny Gillan takes this marvellous cast and weaves them into the kinds of simple situation we all come across every day. But the result is not ordinary. It's a humorous journey, commenting on life, love, the modern world, and the hopes, desires, aims and ambitions of thoroughly ordinary yet extraordinary people."
~D. Robinson, on Amazon