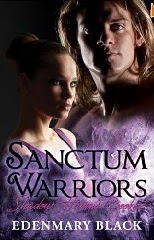 Ilea Galaurus may be running the Demesne, but all hell breaks loose when Micah Odera, a vampiric warrior of the Sanctum, spots Sebastien Galaurus in Saint Rushton. The Demesne's dictator is determined to have his freedom with a select group of loyal warriors so they can enjoy hunting the humans of Saint Rushton. When one of his weres discovers Arabella D'Court sitting alone in a park, her scent tells him she is more than beautiful. She's something special enough for Sebastien's first meal in freedom. What the were doesn't know is that Arabella isn't like most humans. She's a member of the Sanctum's Basium Cruenta, an elite group of protected humans living at the haven to provide blood to Sanctum vampires.

She's also the only woman Odera can't shake loose from his heart. Arabella loves Odera deeply, even though he just can't bring himself to watch her age or die. When he gives her the truth and tells her to find another, forces are set in motion that neither can control. After the brutal discussion, Arabella seeks the peace of a local park, but ends up trapped in Sebastien's new lair. Her unlikely ally? A daemon healer named Lily, who has lived her entire life at the Demesne.

As Sebastien's thirsts for violence and Arabella grow, Sanctum warriors head for Saint Rushton with kidnap or kill orders on the dictator's life. They'll have a little help from the hereafter, but it won't be enough to stop the furies unleashed when they meet Sebastien's warriors.

"I loved book 1 in this series and was anxiously awaiting the second book. I was not disappointed! With hot love scenes and intriguing plots Sanctum Warriors is a must read for Paranormal lovers."

"Sanctum Warriors is absolutely captivating and I recommend this amazing novel to anyone who enjoys all the elements of begin human as well as the supernatural experience."
Posted by Donna Fasano at 5:00 PM