The Last Romantics by Ruth Harris 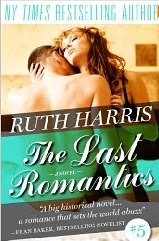 Book 5 of the 20th Century Series!

A passionate and sweeping historical romance set in the glittering capitals of Paris and New York in the 1920's, THE LAST ROMANTICS is about the larger-than-life men and women who created the art, the styles, the fashions, the attitudes that would define the 20th Century.

Nicole Redon is French, a talented fashion designer whose shocking designs influence women around the world. She is beautiful, charming, lonely, haunted.

Kim confronts a devastating tragedy. Nicole guards a desperate secret. They meet by chance and pursue their star-crossed romance in New York and Paris, on safari in Africa, in glamorous resorts on the French Riviera and the savage blood-drenched front lines of two world wars.

“Great Book! A first-rate love story. Harris skillfully weaves fact with fiction in the creation of this tale of love, loss, success, failure, war and peace. If you're looking to bury yourself in a big historical novel full of larger-than-life characters, this is the one.” —Customer Review